Bollywood, and it feels good to say this, is swarming with talent right now. Talent is getting its due and content is the driving force at the box-office. Seriously, even if star power promises big opening moolah, what makes one hit is the real deal. In fact, it is safe to say that we are living in the era of the Vicky Kaushals and the Kartik Aaryans of the world. And we took the names we did because they have become the real deal over time! That's right, both Vicky Kaushal and Kartik Aaryan are ruling the roost with their performances.

And not just cinema, they are also taking good care of fans on social media and their following is the proof of same. From AMAs to reply to comments, they're doing it all. When not doing that, they have also been sharing shirtless pictures and we haven't seen better thirst traps! Needless to say, the shirtless pictures create a lot of buzz online. Like last time, when they both grabbed the headlines for their bare-bodied smouldering gazes. (Also Read: Vicky Kaushal or Kartik Aaryan - who looks hotter in this shirtless picture? vote now)

So much so that, we had to conduct a poll to tame the noise. And guess what? We have a winner! We asked fans who looked hotter sans the shirt and the top spot has been taken by Vicky with 60 percent. Don't believe us? Check it out here! 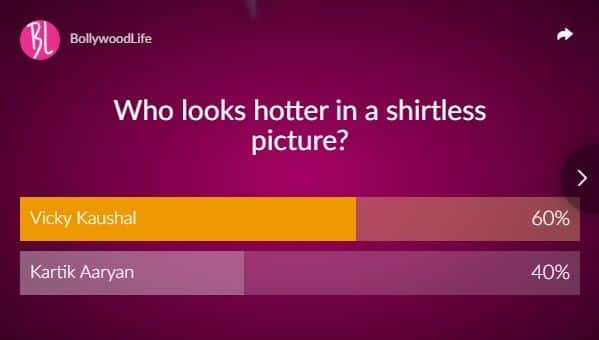 So, now you know! Although, Kartik's spot with 40 percent doesn't look bad either.

On the work front, Vicky has quite a few films in the pipeline. He has two biopics lined up, one is Sardar Uddham Singh and other is on Sam Manekshaw. He will also be a part of a horror franchise film Bhoot - Part One: The Haunted Ship. Vicky will also feature in Karan Johar's ensemble period drama Takht. Kartik, on the other hand, will be seen in Patni Patni Aur Woh which is a remake of the 1978's classic of the same name. The film will feature Bhumi Pednekar and Ananya Pandey opposite Kartik. He recently wrapped up shooting for Imtiaz Ali's next which is tentatively titled Aaj Kal. Sara Ali Khan plays Kartik's love interest in the film. The actor also has Dostana 2 in the pipeline. For more such updates, stay tuned to BollywoodLife!

Rani Rampal nominated for 'World Games Athlete of the Year'
6

ICAI CA Final Result 2019–20 Expected Today! When, Where and How to Check Exam Scores Online at icaiexam.icai.org
8